Into The Dragons Den

Into The Dragons Den

Sunday 30th September 2011 saw an extremely rare occurrence on British TV and in Dragons Den history as father / son duo of GreanBase Ltd who were presenting The Wheelbarrow Booster became only the second company in ten years to reject the financial advances of the Dragons and walk away from the TV show with nothing.

The Wheelbarrow Booster is a simple garden tool that can boost the capacity of almost any wheelbarrow by up to 300% saving you time and energy. Theo Paphitis commented that he could “not believe no one had thought of it before” whilst Deborah Meaden stated that she herself would be “buying one.”

Following a confident pitch to the 5 multimillionaires the program seemed to be concluding to a traditional ending of an offer of investment and a happy handshake. Unfortunately the difference in valuations of the company saw the five Dragons visibly shocked at the no nonsense negotiating style of the two Yorkshire men who instantly turned down the first offer from Duncan Bannatyne without listening to any other comments from the Dragons.

“We have all seen the program” quoted Joe Smith “you start low, they start high and it goes from there, but the offer to give up 50% of the business was way off the mark and we were not prepared to be pushed around.

We were really happy that we received positive reviews from every single Dragon and realised we probably would have received further offers as well. Time will tell whether we did the right thing or not.”

A BBC employee stated that social media site Twitter “went crazy” due to the mannerisms of 50 year old landscaper Mike Smith with some applauding his strong stance whilst others believing him to be naive to turn down the investment offers from Duncan and Hilary. 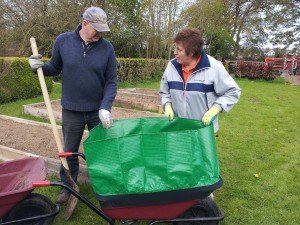 Interest in the wheelbarrow booster in the days since the programs airing has gone through the roof as the company continues to speak to national DIY chains and independent garden centres in regards to stocking the product in the future whilst they have now also received other external offers of investment.